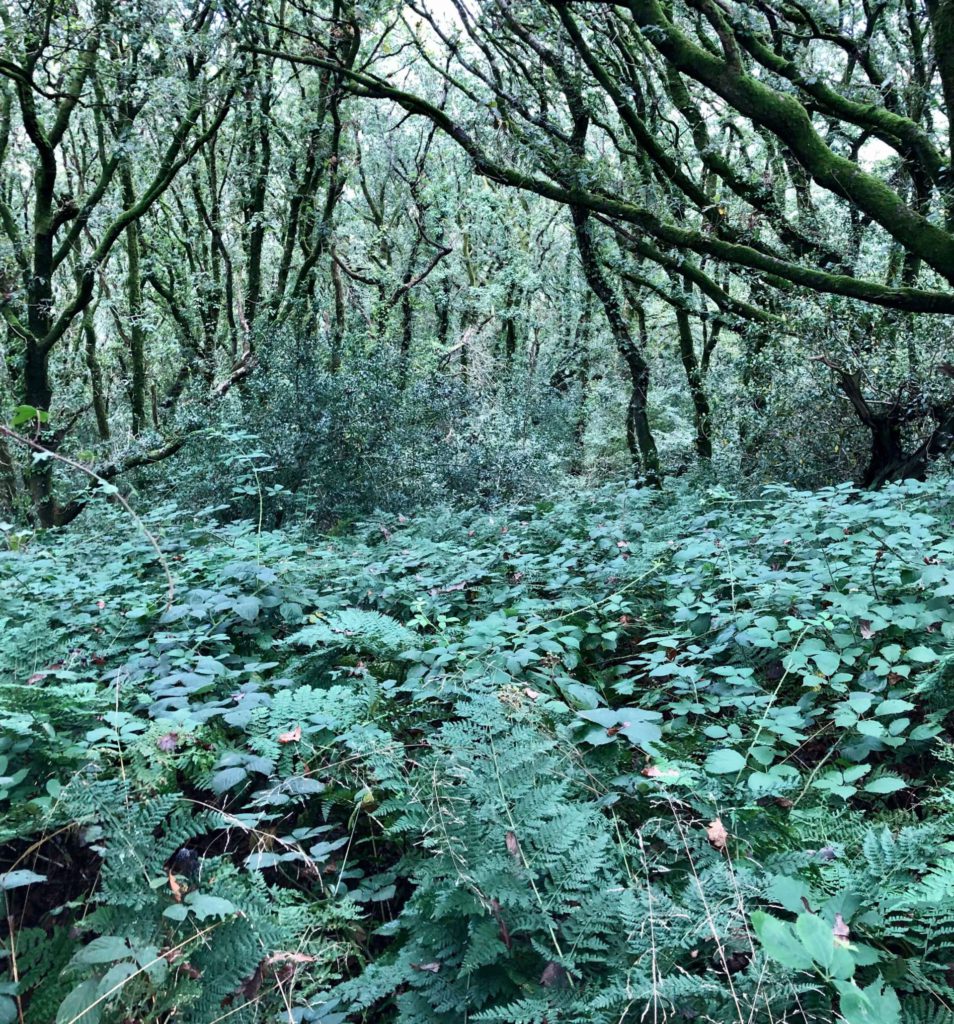 Carmarthen Bay in West Wales is much loved for its broad, peach-white sands, its migratory birdlife and its sweeping sand and mud flats and salt marshes. It’s the birthplace of the Arthurian legend of the magician Merlin and one of the landscapes that inspired celebrated Welsh poet Dylan Thomas. In 2009, the UK’s Joint Nature Conservation Committee listed Carmarthen Bay and Estuaries as a Special Area of Conservation, for the presence in the Bay of and its saltmarshes of sea rush (Juncus maritimus) and marsh-mallow (Althaea officinalis), rare invertebrates  and the twait shad (Alosa fallax), a threatened migratory fish.

Coed Rhyal – an ancient oak woodland – occupies a northwest-facing slope overlooking Carmarthen Bay. Whilst the inland Bay is less visited than its coastline and marshes, and certainly less studied, ancient deciduous woodlands such as Coed Rhyal, a recent acquisition by Sacred Groves, are also key to the region’s rich ecosystem. At Coed Rhyal, a closed canopy of ancient oaks provides both the moisture and shade for a host of symbiotic flora and fauna, from honeysuckle climbers, to edible bilberry, primrose and ferns and the bluebells that explode in a glowing counterpane of mauve each early spring.

“Coed Rhyal has some wonderful ancient woodland indicators, such as wood sorrel and campion,” says woodland and forestry manager Marc Liebrecht, custodian of Coed Rhyal for Sacred Groves. “There are veteran trees and, crucially for biodiversity, there is deadwood with plenty of friendly cracks and crevices for bats and birds to nest and floor as well as deadwood that’s great for fungus.”

A permissive path [a route designated by law for use by the public], thought to be an old horse and cart path, runs through the woodland and dog walkers and runners often use the route. On his last visit to the wood, Liebrecht met a local dog walker there who was pleased that Coed Rhyal – which translates as Rhyal’s trees – has been acquired to be kept wild for posterity.

“Rewilding is usually appreciated by local communities who want to preserve their natural heritage,” Liebrecht says.

Although improvements have been made since the end of World War One, when woodland covered less than five percent of Wales’ landmass, today woodland only covers 14 percent of the current land surface in Wales (in comparison to a European average of 37 percent), and as of 1998, only 38 percent of Welsh woodland was composed of native species such as oak (Welsh Assembly Government, 2013). Wales’ ancient woods are worth preserving. Ancient woodland is the UK’s richest and most complex terrestrial habitat: home to more threatened species than any other natural environment. Centuries of undisturbed soils and accumulated decaying wood create the perfect home for communities of fungi and invertebrates, as well as specialist species of insects, birds and mammals.

Back in Coed Rhyal, as the path ascends, the route passes abandoned coal works and gaps in the canopy open out to glimpses of the estuary and Carmarthen Bay. These snatched vantage points make Liebrecht privileged to be able to visit this ancient wood.

“The path meanders up the slope and has such a nice feel about it,” Liebrecht explains. “There is a viewpoint where you have unbroken views of the estuary and its setting in the wider landscape. It’s breathtaking and also somewhat soothing as you feel so cool under the forest canopy.”

WHAT IS FOREST BATHING?

Forest bathing became part of a Japanese national public health program in 1982 when the forestry ministry coined the phrase shinrin-yoku and promoted topiary as therapy. Shinrin-yoku, or is defined broadly as “taking in, in all of our senses, the forest atmosphere”. The program was established to encourage Japanese to get out into nature, to literally bathe the mind and body in green spaces, and take advantage of public-owned forest networks as a means of promoting health. Some 64 percent of Japan is occupied by forest, so there is ample opportunity to escape the megacities that dot its landscape. Now there’s scientific evidence to bolster the claims of shinrin-yoku,with phytoncides, compounds released by plants and trees, have been shown to reduce the stress hormone cortisol and activate the immune system.

Tommy Carr, leader of Welsh forest bathing group Mindful Walks (@mindful_walks) on Wales’ ancient woods:
“Old woods differ from younger woods for me in terms of a feeling of being something greater than just trees, there’s a sense of the whole ecosystem and the sheer size difference which affects light and shade. Younger woods can have their own quality but it’s the ancient woods I love. Walking together in these woodland landscapes I think that people cannot help but build a greater appreciation and love of them. Though it isn’t always explicit that we talk about the woodland and conservation itself, taking people who rarely walk in nature and reconnecting them to their own nature is crucial. There’s been a big increase in small woodland ownership in Wales since the pandemic and lockdowns. I hope that the increase in interest and desire to protect these habitats will continue and we can recognise the true natural resources of Wales.”

Monisha & Vikram Krishna, Co-Founders Sacred Groves:
“As we walked down the path less trodden at Coed Rhyal, we felt that we had been taken back in time to the world of Enid Blyton and her incredibly imaginative stories set in the backdrop of the enchanted woods. We dedicate Coed Rhyal to the children of Wales and hope to support many more such treasures in the future. We have miles to go and many promises to keep!” 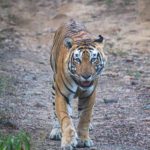 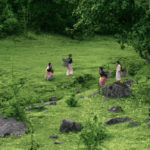