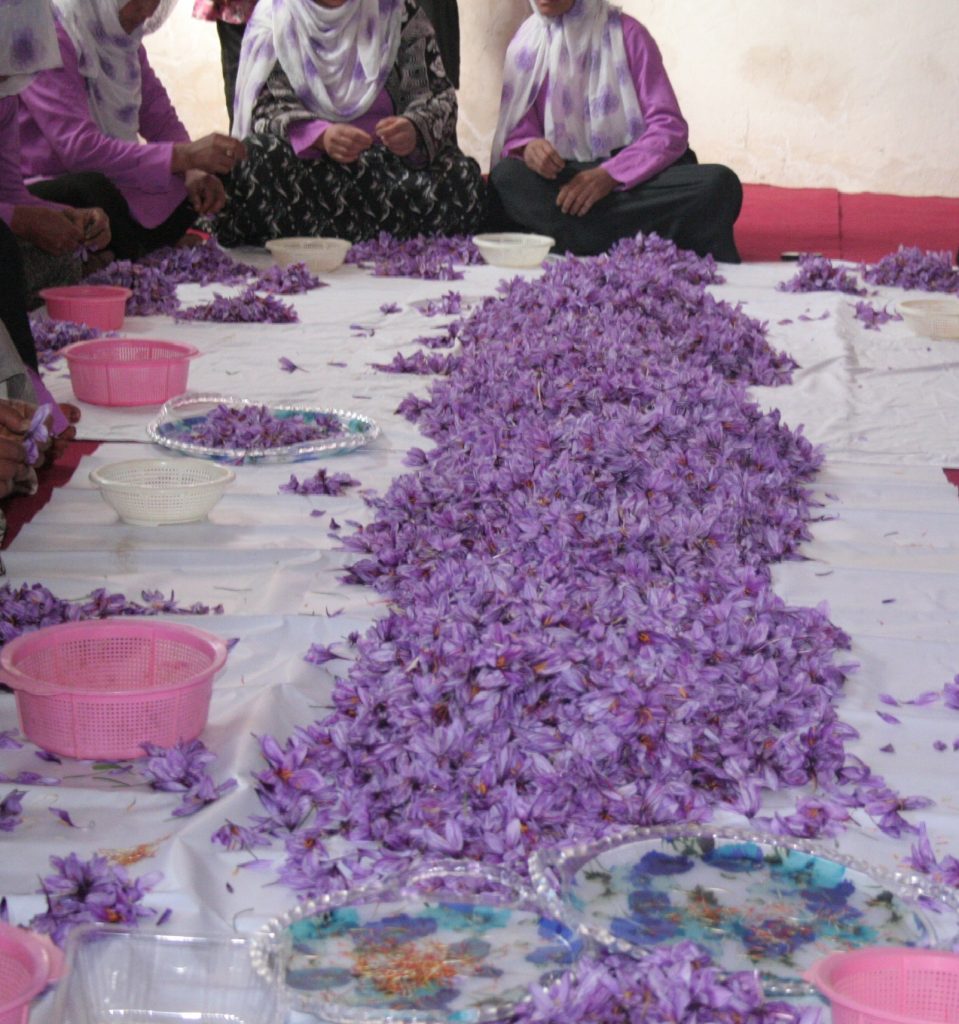 Afghanistan and a grassroots women-led cooperative has come up with a promising alternative to the illicit trade in opium poppies, which wrecks the nation’s ecosystem as it funds wars.

Harvest time in Ghoryan, Western Afghanistan and, fingers moving balletically from petals to the baskets at their side, six women pickers chat beneath the folds of their hijabs. The purple flowers filling those baskets represent a means of keeping families fed and clothed in a country in which decades of war have left 15 percent of adult females widowed. Little wonder this novel crop has been locally nicknamed: ‘purple gold’.

Once the world’s biggest producer of raisins and pistachios, by the early 1990s most of Afghanistan’s fertile farmland had been turned over to the production of opium poppies. In a 2010 United Nations report, Afghanistan was found to be the source of 93 percent of the world’s opiates, a trade then representing 46 percent of the nation’s GDP and the principal source of funding for insurgents who have for decades terrorised Afghanistan’s population, including the Taliban. In addition to this grim legacy, opium poppies are a water-intensive crop that has diminished Afghanistan’s soil quality and water table even as global warming puts this semi-arid nation at greater risk of drought.

Enter the The Afghan Women’s Saffron Association (AWSA). Launched in 2011, membership of this all-female cooperative of saffron growers now numbers in the tens of thousands. In a market tightly controlled by male merchants, the association works to achieve fair rates for women cultivators, selling directly to saffron consuming markets in the rich world and, through community outreach programmes, incentivising the transition from opium poppies to saffron by offering advance payments for seed purchasing and to fund heaters to dry the stamens that, too fragile for mechanical methods, need to be picked by hand.

The growers, says AWSA founder Sima Gharvani, have nature on their side. The most prized variety of saffron crocus, the fragrant Negrin, tolerates Afghanistan’s dry winds yet, compared to the opium poppy, is modest in its water consumption. It’s also far more lucrative than that illicit plant, with saffron commanding US$18per gram in global markets, compared to the US$0.10 per gram for opium resin. It is thought this women-led co-operative could be replicable in other drug-war torn global regions in which opium growing is rife, such as Mexico and Columbia.

The association has been a lifeline for women such as Afarin, a 29-year-old who lost her husband in the 2007 Taliban insurgency. In deeply conservative Afghanistan society, widows are stigmatised: considered bad omens at family gatherings and controlled by a strict social code that forbids them from wearing bright colours and laughing in public. Before gaining work in saffron picking and processing via the Ghoryan Women Saffron Association, a regional offshoot of AWSA, Afarin relied on family charity and overseas food aid to feed her three children, two boys and a girl aged 7 to 11. Today, however, she can afford to send her oldest child to school and cover her diabetic mother’s medical bills. “Without the association my children would be hungry,” she says. “Now my life is better. I like coming to work on the harvest; I have made good friends here.”

As in many developing nations, Covid 19 has been a challenge for Afghanistan. The nation lacks healthcare infrastructure and 44 percent of all Afghans, according to the World Food Program (WFP), rely on livelihoods that have been disrupted by the outbreak of Covid-19. In Ghoryan at least, this year’s harvest is a good one and Afarin is hopeful the Negrin crocus, as well as peace, will continue to bloom in Ghoryan. “We take life a day at a time,” Afarin says. “But when I look at a field of flowers, I smile.”

Africa’s Queen of Recycling? That makes... 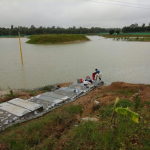 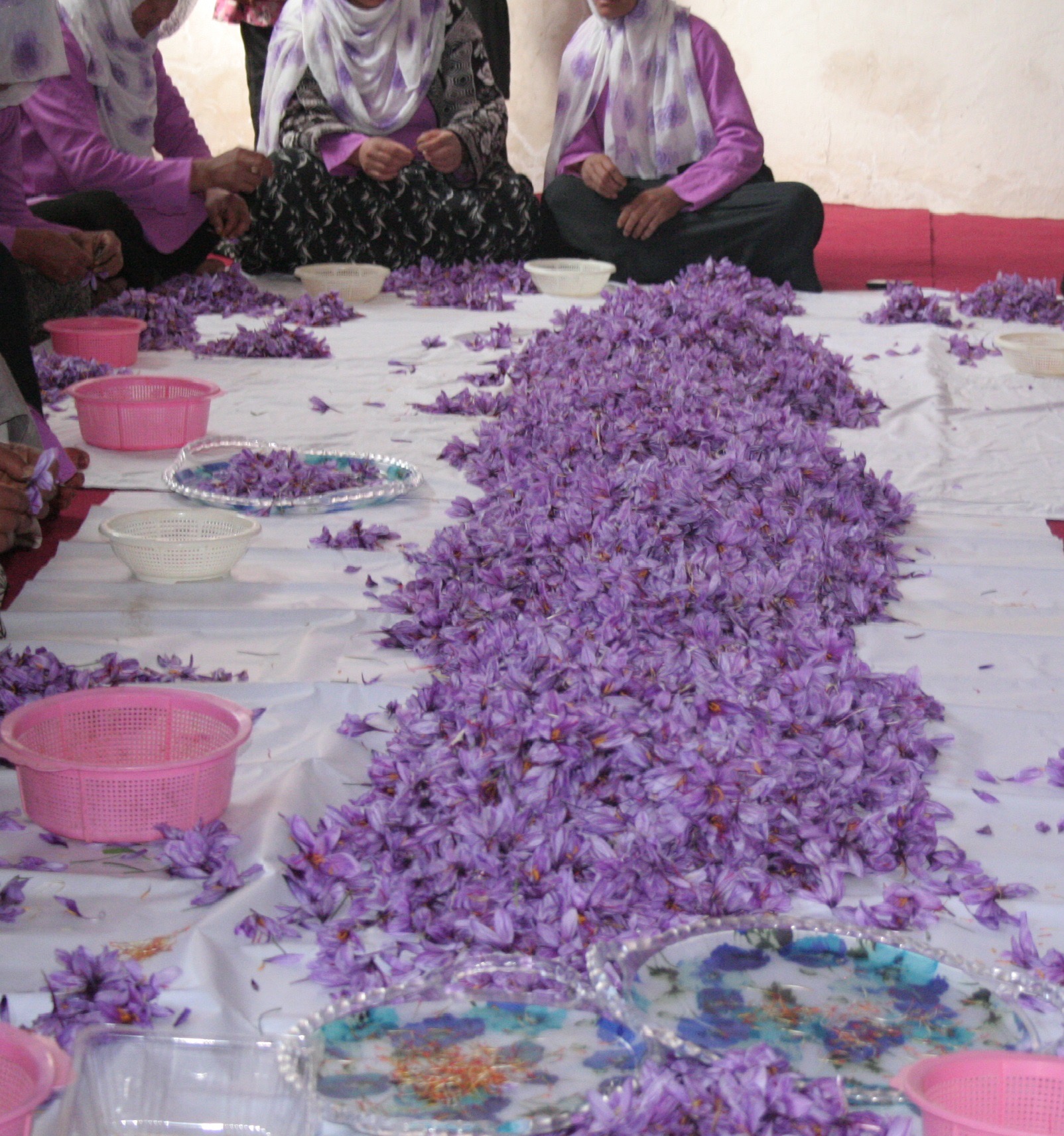 In the War-torn Soils of Afghanistan, Hope Blooms